Tough being a rescued Bully!

I feel the same way buddy.

What the hell do those two things have to do with each other?

Turns out, the what to do when all hell breaks loose is pretty much the same for both.

When I went rafting a long time ago, one of the safety tips they gave was, “if you fall out of the boat; try to go down river face up, and feet first!”

Yesterday I was running a team of two bullies, who (between the two of them) weighed about 150 lbs, and can pull around 3,000-4,000 lbs! I had them at Poland Springs Preservation Park. Which is an awesome place for reactive dogs. The trails are super cool! And to top it off….. there’s almost no one ever there! It’s so dead, that I’m not even gonna hotlink it to a map like I usually would, cause I don’t want to run into you with the goobers I take there!

On the trail, these two monsters were helping me pick up speed going DOWN a hill, and I hit a patch of mud hidden just under a layer of wet leaves. After sliding like 10 feet and flapping my arms like a bird didn’t work……. I remembered my whitewater safety course. So yeah, Nestea Plunge I went.

And just like in whitewater safety it took like 50 yards before I came to a stop! Yeah….. They pulled my down the hill with me making a high speed mud angel.

Now, to their credit they probably would’ve stopped sooner, but it took me like 40 yards to stop laughing uncontrollably at the absurdity of the whole thing.

So, remember….. In whitewater safety AND in Canicross, feet first & face up!

Roberts Farm Trail Preserve is putting on another CaniCross. It’s on Sun, Nov 18th. It’s at 9am. Registration is over at 8:30am.

Noocksak Racing usually has a booth at these races so it’s a great time to meet them and get some gear!

I just found out about it, so I’m trying to adjust my schedule to get it in!

But if you’re remotely into this idea, you should try and get down there and support it. Participate, or just watch! The more people that are there, the more likely they are to have more of these events!

The dogs that get the most press are the aggressive ones. I must admit when we started this thing, I assumed most of our client base would be dogs that couldn’t be left with other services. What I hadn’t planned for, was the dogs who were just so scared, their people wouldn’t leave them with others. To be honest, we’ve had one of those too….. But my mind, like everyone else, just went to the gnarly dogs that we can help. But one of the fist dogs we got was a shy guy, not a tough guy. Very shy. As in, took like ten minutes to get him to even investigate me. Fortunately, his owner was one of my students….. So, we already have a very high level of trust. So she, with a tremendously deep breath, handed me the leash. This is her experience with her shy pups Canine Outward Bound Half Day.

“The trust work began way before the agility course.  The first leap was to put Graf in the hands of two people he had never met before.  You see, Graf is the opposite of a dog with aggression problems – he is shy.  It’s not that he bites strangers, it’s that he just shuts down. When we meet new people on the street, Graf hides behind my legs.  So letting Jay and Mandy work with him for a whole afternoon, with me on the other side of town, was trust work not just for my little boy but for me, too.  But Jay has done wonders for my confidence as my self-defense trainer, and I have seen him work with his own dogs.  So, I was willing to take a chance that Jay and Mandy could help little Graf come out of his safe place, too.
My trust was well placed.  They sent text messages with photos of Graf’s progress.  The first one showed my boy kissing Mandy – this from a dog who won’t even take treats from strangers.  Before the day was over, Graf had done lead work side by side with a dog he had never met before, agility work on difficult obstacles, and found out that he liked treadmill running.  Not only was he not hiding, he was having the time of his life.
I think what Graf really found out that day (and so did I) is that taking chances with new people can reveal his own inner strengths.  He was not only learning to trust strange people and strange dogs, he was learning to trust himself.   What a different puppy I picked up that evening!”

Saturday, we had a GREAT Canine Outward Bound half day.  First, we got Phin- A SUPER high energy 6 month old female herding dog mix. Inexhaustible is a good description.  Because her energy is so high, her owners have a difficult time getting her out as much as they’d like.  And while not dangerous in any way…… She is a handful!  Then we added Graf. A very timid 1.5 year old Schnauzer. Great dog, just VERY shy. No confidence. Scared, but extremely loving.  Both are described by their owners as tense, or nervous around other dogs.  Phin has no people issues. Graf was described as not aggressive, but not very trusting.

So…. Today’s adventure was geared towards not just physical exercise, but getting them comfortable around strange dogs, people, and situations.  We started with a few short individual walks with each pup. Then they were walked together but on separate sides to allow them time to acclimate to the other dogs presence, and see that we’re running the show and the other dog is no threat.  Pretty soon we have them walking together on the same side. Awesome. Goal one down.

Their comfort level told us it was time to hit the trail so we headed out on the Riverton Trolly Trail, on the Portland Trail System. It’s a great trail with tons of staircases, and bridges, and crazy castle looking rock walls. 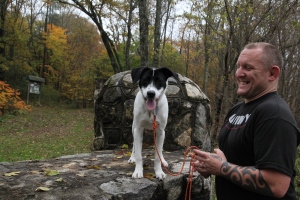 Lots of stuff to challenge these pups environmental issues. They did awesome!!!!

Got along great. Handled every challenge with growing confidence. And, Graf even started to let some of his personality out.

Next we went indoors. Today we worked inside at The Academy, a martial arts school in Portland (we happen to own it, conveniently). This gives us room to work and play around a lot of distractions and challenging obstacles.

We did Agility with these guys for a while. Now I don’t mean jumping over crap randomly. I mean, finding things that are a little intimidating, and then getting them through their fear. We also use this to reinforce the relationship. As in we go over this thing because I say we do, AND, you don’t get down until you’re dismissed. 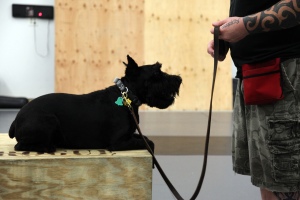 Just like people, when they face fears and come out the other side….. they develop confidence!

And that’s exactly what happened. This obstacle that was so intimidating in the beginning, just became this neat thing to play on and around when they earned some free time.

Oh yeah, did I mention that these two now play freely with each other and us. Full of confidence. Zero timidity!

After a little free time, we ended the night with one last challenge….

Now Phin is a treadmill pro, as her owners had taken my advice already and worked on that with her.

But Graf…… For Graf, this was the crowning moment.

All the work we put in earlier really paid off! After just the slightest hesitation, he was on it and running. He’s a new little man.

He even jumped on it later and looked at me like “Ok, lets do it again!”. 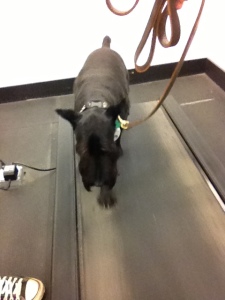 Since it was only a half day session it was already time to let these guys go back home.

And did we mention tired? 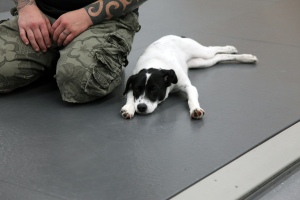 Like what you see…. Book your dogs Canine Outward Bound Adventure today!